Corporate Activities in the U.S.

Hisamitsu America, Inc. was established in 1987 to sell Hisamitsu Pharmaceutical’s over-the-counter medicines in North America. The head office was set up in Florham Park, New Jersey, and handles pharmaceutical sales across the United States and Canada. In the market for transdermal anti-inflammatory pain relief patches, we have been steadily carrying out the company mission of “Promoting Patch Treatment Culture Worldwide” and have achieved the number one market share in the American market in 2017. Hisamitsu America has 14 employees, working in sales, marketing, and business administration. Four of the 14 members of the diverse staff are women.

Founded in 1987, Noven Pharmaceuticals, Inc. sells transdermal products, and has responded to unmet medical needs through the research and development of products with a focus on women’s health and central nervous system disorders (including ADHD). In 2009, Noven became a subsidiary of Hisamitsu Pharmaceutical Co., Inc., and serves as Hisamitsu’s U.S. platform for prescription pharmaceuticals, helping bring the benefits of patch therapy to the world. The firm has over 300 employees (as of the end of December 2017), and has a manufacturing facility in Miami, Florida, as well as an office in Jersey City, New Jersey. The Miami manufacturing facility is approved by the U.S. government’s FDA (Food and Drug Administration) and DEA (Drug Enforcement Administration) to manufacture regulated substances. The facility produces tens of millions of patches annually.

Hisamitsu America’s President & CEO, John Incledon, is also an officer of CHPA (Consumer Healthcare Products Association), an industry organization of American OTC manufacturers, through which he is actively working to address social issues in the United States.
In July 2018, a dialogue was held between John Incledon and two members of the CHPA’s senior management team—John F. Gay and Anita Brikman—raising issues related to pharmaceuticals in the United States.

John Incledon：Thank you for joining me today. I would say that the issues highlighted by the CHPA and its efforts are important not only for the U.S. but also for Japan, and in fact, the rest of the world.

John F.Gay：John F. Gay: First, I would like to tell you what we are working on now. The key question we raise is, “Are people properly handling medicines after purchase?” The issues include side effects from taking medicines in ways that are not intended and the improper handling of unused or expired medicines that can lead to harm for children and the environment. These are becoming big problems in the United States.

Anita Brikman：CHPA has established the CHPA Educational Foundation to address these issues. The foundation distributes informational brochures and engages in other forms of education, including raising awareness through the media and other initiatives. Eight out of 10 parents have given the wrong dose of medicine to their children at some point; 60,000 children are treated in an emergency room annually; and 60% of adults do not know how to dispose of medicine properly. We have taken big steps to try to improve this situation.

John Incledon：I understand that Japan faces similar issues, but I don’t think such educational efforts are being pursued there as actively. I think that, in the future, these kinds of initiatives will be promoted outside the U.S.; what do you believe are the key points that need to be focused on?

John F.Gay：First, it’s important to fully grasp the current situation by asking what is actually happening, and what kind of issues have arisen from those circumstances. When we get those answers, it will then become clear what we need to do.
Collaborations with government are also important. In the United States, initially there were no statewide programs or initiatives for collecting unused medication. Now we are starting to see such programs being put in place.

John Incledon：The CHPA has only just gotten started in its efforts, yet has achieved significant results. Carrying out CHPA best practices around the world also links to the aims of the UN’s sustainable development goals, and can also offer hints to solve many problems that exist in Japan. I would like to see the efforts of Hisamitsu America extend to the entire Hisamitsu Group.

The social mission of Hisamitsu America is to extend Hisamitsu’s company mission—“Promoting Patch Treatment Culture Worldwide”—into the United States. Over the last several years, we have achieved the number one share of the U.S. market for transdermal anti-inflammatory pain relief patches, but medicine is most commonly taken orally in the U.S., so there is a need to further educate people about patches. But we hope to build our presence by working earnestly on social issues in the United States.

President & CEO John Incledon says, “In American culture, the use of patches did not exist before as a custom. Rather, people believe, essentially, that the only kind of real medicine is the kind you take orally, which has made our job difficult—to convince them of the benefits of patches.” We employ multi-channel efforts that include product sampling, using influential voices on social media to promote our products, and advertising in the mass media.
In addition, we try to expand the potential uses of patch technology by utilizing the best practices of other companies and the experiences of the Hisamitsu Pharmaceutical Group in various countries.

Hisamitsu America is small and has few employees, but it is ethnically diverse and employs different kinds of men and women. The company is working to respond in a flexible manner to federal and state regulations on such issues as labor conditions and employee benefits.
Akiko Chan and Kozue Long told us that they sometimes needed to take time off to look after their young children, but that they were able to do so with the understanding of their colleagues, and that they were happy with Hisamitsu and found it an easy place to work.

Since Hisamitsu America does not manufacture products, it doesn’t have a large environmental footprint. We still consider it necessary to take global climate change and its effects seriously, though. Andrea Washington told us, “It seems like strange things are going on—even here in New Jersey, the winters are becoming incredibly cold.” William Henderson says, “I have started to see lots of solar panels around, and personally I started driving a hybrid.”
Although environmental issues may not have a directly visible impact on our business activities, we feel that as a company we must take the issues seriously, such as greenhouse gas emissions.

The spirit of volunteerism has solid roots in American society. At Hisamitsu America, we promote volunteering through “Salonpas® Day” and other activities. All of our employees are becoming aware of social issues and take their own action. “By working in dog rescue, I feel how warped society has become. This has helped me to consider the true meaning of quality of life,” says June Nishizawa. Mike Wesnofske says, “I have learned many things from being a local sports coach and delivering meals from a food bank, such as the importance of diversity and team play, which helps me in my daily work.”

Since its founding, Noven has utilized patch technology to improve the quality of life for patients who use their products. Since becoming a subsidiary of Hisamitsu in 2009, both companies have expanded their transdermal drug delivery system (TDDS) technology to develop and supply safer, more effective products.

“Since becoming Noven’s CEO in 2016, an essential part of my role has been to cultivate a good understanding of our mission at the individual level across the company,” says Jeff Mihm (Chief Executive Officer). In pursuing that mission, Noven strives to build a solid reputation with doctors, patients, partners, and payors - the insurance companies that play a major role in the medical system in the United States. Taking the initiative in leading the company forward, Mr. Mihm holds quarterly all employee town hall meetings and spends a great deal of time interacting with colleagues to ensure he understands the needs of entire organization and that Noven’s colleagues are motivated and engaged. 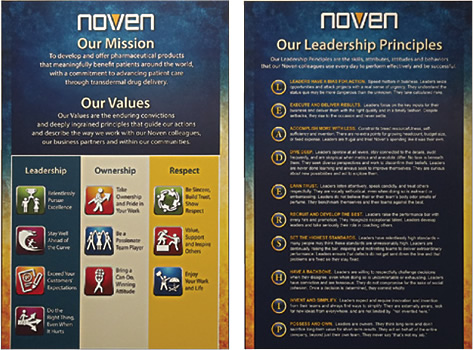 It is also important to ensure that management tasks affecting the innovation gateway system such as the maintenance of equipment and facilities, occupational safety, and supply chain management are properly handled in the field. “We submit our purchasing plan based on requests to suppliers for technical and environmental performance reports and other factors, and we implement preventive occupational safety measures.
We would like to further enhance these activities in collaboration with the Hisamitsu Pharmaceutical head office in the future,” says Amaury Gonzalez (Executive Director – Engineering) of his ambitions for the company.
“In this industry, regulations are constantly changing, and there are also differences between federal law and state law, so we work closely with Hisamitsu to meet all requirements,” note Michael Greene (Vice President, General Counsel & Corporate Secretary) and Elysa Mantel (Corporate & Compliance Counsel). In-house education and training are also carried out that incorporate ideas from outside experts as part of ongoing efforts to advance the corporate mission.

Noven’s mission to meaningfully benefit patients around the world can be fully realized only if we also act in the best interest of our communities and strive to make Noven a responsible and contributing corporate citizen. From its support of charitable organizations, like the United Way and the Red Cross, to employee-initiated activities like working with the handicapped and volunteering in developing countries, Noven colleagues proudly support a spirit of giving that extends far beyond our local communities. Additionally, as an organization, Noven embraces environmentally responsible initiatives as a means of both conserving our resources and ensuring their availability for future generations.
Looking ahead, Monica Lara (Director – Corporate Affairs) says, “I would like to do my part to help the company engage in a wide range of efforts that address such things as climate change and children’s education, all aimed at improving people’s quality of life.”